The Future of Bitcoin and Real Estate

Whether you own real estate or own Bitcoin, the future does seem like these two will eventually find it's way into your life. The future of real estate and bitcoin are about to intersect in a big way, and here are a few things to look out for in the coming years.

(For those who don't know what Bitcoin is - it probably makes sense for you to "google it" and then come back. But the short explanation (which doesn't do it justice) is that Bitcoin is a combination of digital currency + a digital asset which allows for secure storage and movement of value from one person to another without any banks of governments in control or in the middle of the transaction.

Ok, so let's dig into the future of real estate and bitcoin (e.g. crypto currency).

How will Bitcoin impact the Future of Real Estate

Before we get into the top trends we see coming ahead as more people are shifting assets into crypto currency, let's first outline the main reasons why Bitcoin is becoming a preferred plan to keep your "money".

1. Bitcoin is driven by an algorithm with unbreakable rules and most importantly there is limited supply. Unlike the US Dollar (FIAT) which can be printed and inflationary.

2. Although the intended use of Bitcoin is to allow for transactions to happen from one person to another (peer-to-peer) without requiring a bank or government in between - it has also become an alternative asset class since it rises in value (due to scarcity). So much like Gold or a Stock - it actually has increased in value over time. So the benefit is that it works like currency but also increases in value like an appreciating asset.

3. Many people compare Bitcoin to Gold (because of limited supply) - but the fault in this comparison is that Bitcoin has much more utility and is having a dramatic impact on the socioeconomic landscape across the world. The US owns over 80% of Gold, and so the Global relevance is minimal. Bitcoin is almost the inverse, where the U.S.. owns only a portion of Bitcoin, and thus a much more powerful Global currency. Also, Gold is not easily used to transact (especially digitally) and is not a platform to build economic freedom and independence.

Ok, so now you understand why Bitcoin is becoming a disruptive force in the future of money - but how does this impact Real Estate? Here are some things to consider:

1. New Generation of Wealth (that wasn't made on Wall Street).

There will be a massive creation of new wealth that we have not seen in a long time. In only a few years Bitcoin's value has risen from $600 to $40,000+. Anyone who owned more than 30 Bitcoins is now a millionaire. There is no other investment vehicle that was readily available to the masses that has shown this type of growth so quickly in the history of humanity. To give some comparison, let's look at AMZN (Amazon Stock) - which is thought of as one of the best investments anyone could make. In 2010 it was valued at $100, today AMZN is $3,000. Now, let's compare to Bitcoin. In 2010 it was $0.04 cents. Today it's $40,000.

Unlike other sources of wealth we have seen in the past century which include mostly entrepreneurs who start businesses and create wealth in the stock market or by selling their business, Bitcoin is not a company, has no entity that owns it. It's owned by everything who is part of the network. This dynamic means all participants create wealth for themselves, not others. This is the dramatic shift in why this wealth creation is like no other in the past. Generational wealth is usually only created by 100 year events (e.g. invention of the automobile, industrial revolution, invention of the internet, etc). All of these took decades to create wealth. Bitcoin has done it in 5 years.

Here is the reason why Real Estate is going to be the biggest benefactor of the wealth. The people who invest in Bitcoin (especially the early adopters) do not trust the value of the U.S. Dollar. And a large percentage do not feel the Stock Market is a safe haven for their investments either. They are a different type of investor with a distrust in Wall Street and quite frankly the Federal Reserve. Thus, Real Estate is really the only other asset that will find both security, diversity and pleasure in owning. 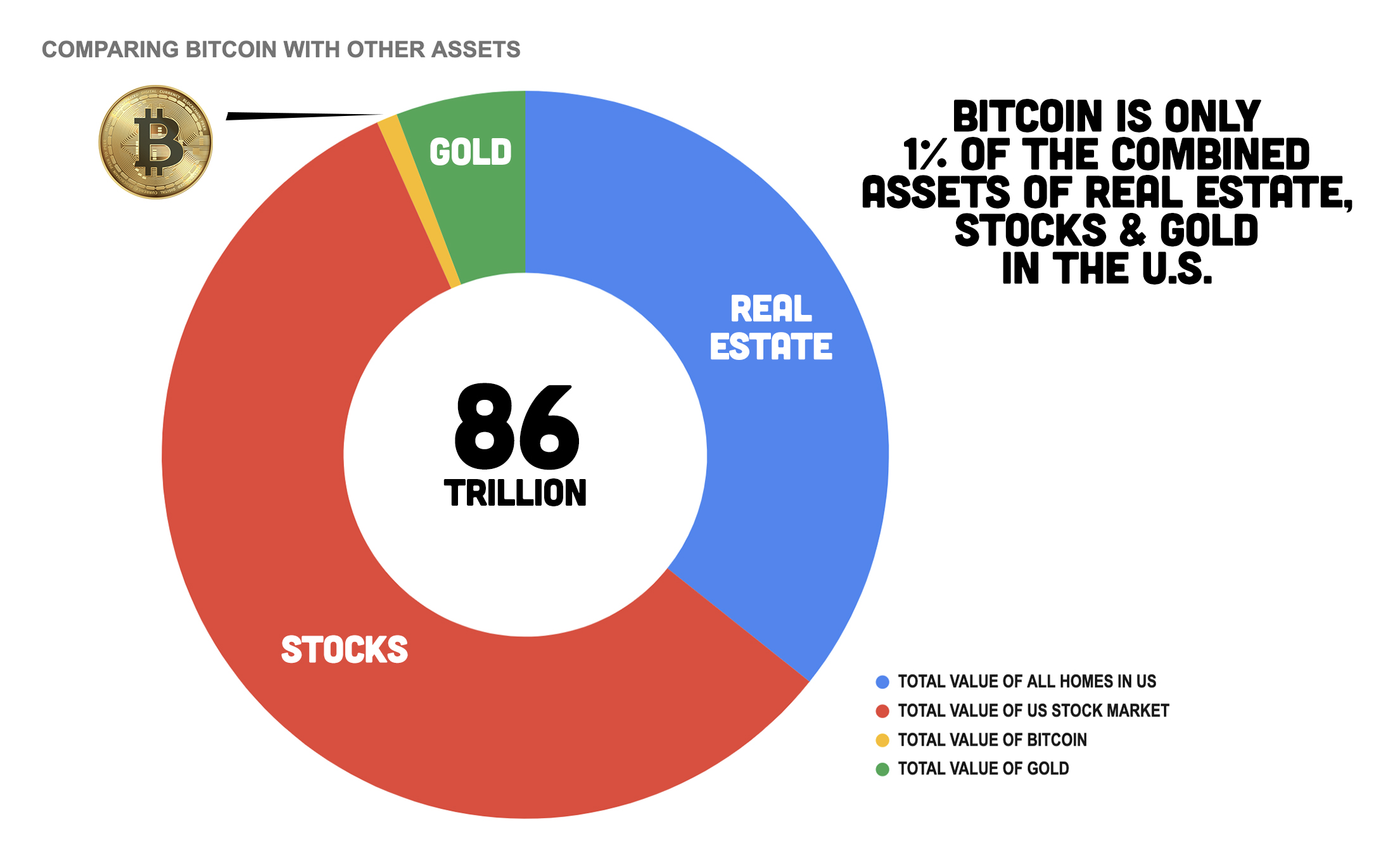 2. Bitcoin and Real Estate is a match made in Heaven.

People who own Bitcoin don't like the US Dollar due to inflation. They probably don't like Wall Street. And in some cases, don't really trust any asset that is controlled or can be manipulated by a third party (corporation or government). So the closest thing that provides them a balance to their portfolio and is an appreciating asset is Real Estate. Also, for those who Bitcoin Millionaires, they will be in the market to utilitize their newly found wealth to buy a new home or a 2nd home (or a 3rd home).

Also, Bitcoin and Real Estate have a lot in common in the way the next generations will think about it's use:

1. Both Bitcoin and Real Estate have limited supply (there is only so much land)

2. Both Bitcoin and Real Estate are appreciating assets that are primarily market controlled. Government can raise taxes, but they can't "print houses".

3. Both Bitcoin and Real Estate can be used as transactional income. If you think about the shift in how new generations look at Real Estate (for example AirBnB) - they are seeing property as rental income (Even if they still live their part-time) through rentals. This is what is appealing to the new generation of investors. They can live in a house, and when their not there - make money via AirBnB. This is exactly the same DNA that is used in Bitcoin. I can own Bitcoin, benefit from appreciation and use it to transact in the cases I need to with no 3rd party involvement.

3. International investors in US Real Estate will rocket.

Nobody really knows (or can know) exactly who owns how much of Bitcoin and where they are located. Although every transaction is published publicly on the Blockchain it just shows the amount transferred from one wallet to another wallet. It does not say who owns either wallet or the location of those wallets. But, we can assume a few things. For example, China once did over 80% of bitcoin mining (when BTC was easier to mine and cheaper) - and today probably does around 50%. So one could assume that a lot of the Bitcoin they mined over the past years is owned by Chinese companies or people. Although it's feasible that US based companies or people owned those machines - it's likely that as the price of BTC rose dramatically, there was no where near the profit in selling machines versus keeping them. Either way, this paints a picture that a lot of Bitcoin is owned by China and many other countries. It's estimated that in the United States only 10% of the crypto mining power is being used. This doesn't necessarily correlate 1-to-1 in bitcoin ownership - however it' definitely gives us an idea of how it's divided up amongst nations.

Now, some people would look at how many people have Bitcoin, and since exchanges do provide some basic reporting they would argue there are more people who own Bitcoin in the US than any other country, therefore we must own the most. This is not necessarily a bad assumption either, however just because we have the most "wallets" doesn't mean we have the most coin. Either way, I think everyone would agree there is a massive amount of wealth in other countries, that will again look for the best investment opportunities in the most stable countries - which does tend to mean United States of America Real Estate. It could also provide them a new pathway to citizenship.

4. US Government will want to motivate the movement of Bitcoin into trackable tax paying Assets (e.g. Real Estate)

Here is the reality of Bitcoin. The US Government can't control it or track it which makes them nervous - but it's also too late for them to "regulate it to death" or ban it. It is truly unstoppable. So the only choice is to incentivize owners of crypto currency to move their assets into other forms of taxable assets. The only one that potentially makes sense that aligns with the needs on both sides is real estate. By providing a tax benefit to buying real estate with crypto currency could be the best way to drive investment in infrastructure and growth - and at the same time - convert from "no taxes via crypto" to taxes via real estate. The only way I can see to really do this would be to allow the transfer of Bitcoin to Real Estate at little or no capital gains tax. Imagine moving billions of dollars into the real estate market with a simple tax code change.

Ultimately all these ideas are hypothetical, and it's fun to predict what may happen as a new technology and invention begins to change the world around us.... but I do see the synergy between Bitcoin and Real Estate as perhaps the most likely outcome of where "digital" money becomes a positive impact on "real" estate.

SmartZip Brings Real Estate Data to the Blockchain with Chainlink

New Tool for Recruiting Real Estate Agents to your Brokerage

We are pleased to announce that SmartZip has launched its own Chainlink node live in production.