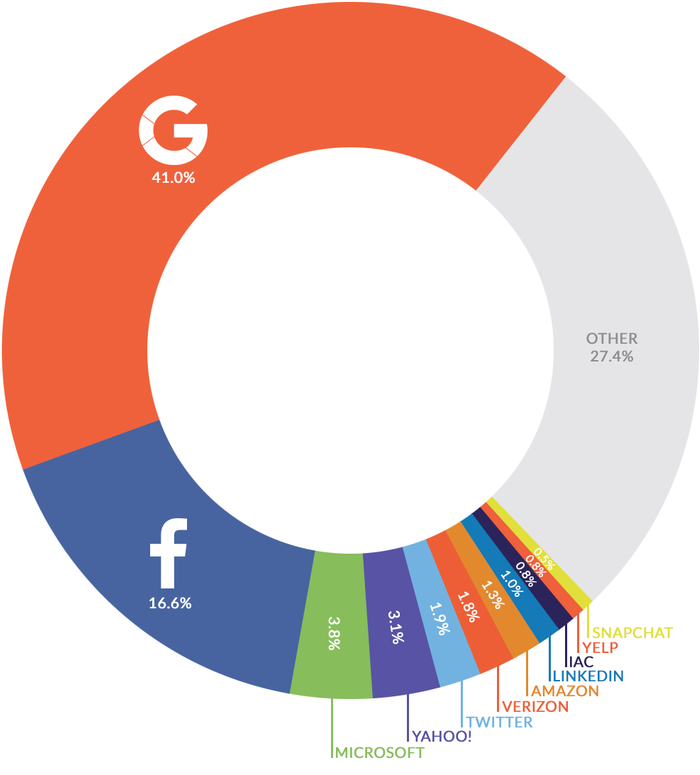 offrs.com Market Review: Google and Facebook Continue Owning It (What This Means to Your RE SMB)

Dissecting a 2017 eMarketing report, we can gain insight on the unfolding trend of targeted digital ad placement. If you're looking to move your dollars into a more effective and results-driven space, then read on...

With the speed at which new tools are being developed, deployed and shared, it would be forgivable to believe that legacy digital content megaliths Google (now Alphabet) and Facebook have hit their peak, having conceivably been replaced by shiny newcomers like Snapchat or Instagram. But this just isn’t the case. In fact, these two founding pillars of the digital age enjoy a rather significant portion of the market and there’s no sign of that dominance waning.

Forget Pudding, Proof is in the Pie

In a 2017 eMarketer report, it was revealed that Google and Facebook’s share of the digital ad space extended deep and wide with a combined 57.6% market share of the estimated $83b market (far beyond the next in line, Microsoft, which coveted a mere 3.8% of consumer attention). In fact, if the numbers continue to hold, it would be accurate to say that Microsoft’s meager share represents more of the norm, where >.5% and <57.6% market ownership rides at an average of around 1.7% which is distributed among nine of the other familiar players (to include Yahoo!, Twitter, Amazon and others in the sub-dominant category). If the numbers tell a story, it’ll be that these two, Google and Facebook, are comfortable but not at all dormant.

Web services have naturally progressed to be less about facilitating communication between two parties that know one another (say, the early days of Gmail and Facebook family connections) and more about the introduction of third-party brand messaging - that is, infusing casual, trusted services or products into the minute-by-minute digital interactions that define our day. Still not convinced? That’s okay... because it’s already happening. And the eMarketing report speaks to a larger trend that’s been growing under our feet for quite a while. For the agents out there, the takeaway warning is this... paying for sub-channel marketing like Zillow (which isn't even on the spectrum here) is not the way to go. When was the last time you heard someone mention Zillow'ing something? Simply put, it's just not where the conversation is.

If you want to reach consumers - homeowners, home buyers and home sellers, you have to be where they are right now. As a consumer, you yourself may feel inundated with ad placement, but as the traffic noise of the crowded web becomes more and more coordinated and channeled, targeted ads will continue to become more reminder than ad. This is because the messaging delivered to your audience will be the products and/or services that were essentially “signed up for,” having been voted on with their eyes in previous web and personal online interactions. Over the years, this data has been collected and studied and the powers that be, namely big movers like Google and Facebook, are now playing their cards.

Looking for an edge in the RE space? Then you're going to want to deal in and compete in the digital ad space (while you're aware and ahead of the curve). Here, backend institutions like Google and Facebook, who have been patiently waiting for the right time to monetize their platforms, have now released entire suites to manage the ad delivery portion of their global network. From mere content design to more sophisticated, demographic-driven and message-honing tools, the 2020’s are gearing up to be about affordable, audience-driven message delivery for small businesses. We haven’t even mentioned the back-end campaign tracking tools we’ve come to know and expect from these and other players in the market.

A bit daunting? Perhaps it’ll ease your mind to remember that Social Media, as a concept, up-ended the conversation flow and evoked at the time, similar questions and concerns... the whole concept of rapid broadcast and instant invitation to unseen numbers of social spheres was a huge unknown, but now... it's just a like/share button. And, just as 3rd-party social commentary became a commonplace (even cherished) form of interaction for the masses (let alone a great way for brands to penetrate new markets), so too will targeted and trusted brand messaging placements. The fact is, you’re already interacting with Google and Facebook ads, where what you type is what you see. The only question now is, are you ready to take the helm? That is, is your business ready to start leveraging this new space.

If you're not an admin-level user of Google Adwords or Facebook Ad Manager, it'll be best to bring in the muscle to manage the controls for you. The sad fact is, it's not an easy plane to fly, but the rewards are countless (if you can pilot it). So what does bringing the muscle mean in your daily operations? It could be something more familiar like an assistant taking on the role of pilot or, someone more specialized like an external campaign manager coming into the picture. Unfortunately, these both come at a fairly significant cost (if not in dollars per hour, then in hours alone).

Another option will be hybrid solutions, such as the online listing tools provided by offrs.com, where agents can more easily manage their ad placement across mega network structures like these. Whereas narrowing your controls to become more manageable might traditionally limit your reach and campaign results, the team at offrs has streamlined the front end, making it much more familiar and manageable for the day-to-day agent. All-the-while, putting in place ad specialists to personally manage the process on the back-end. Not dissimilar to power-brokers deploying early predictive data systems in the 1980's, the 2020's are lining up to put small businesses on The List. Of course, the question again is, where do you want to be?

offrs collects and provides topical insights, statistics, reviews, humor and best practices gathered from real estate professionals and consumer homeowner industry peers. If you're a broker or agent interested in learning more about seller lead generation or automated marketing services and solutions, visit www.offrs.com or continue to browse our growing collection of industry articles at www.offrs.net.

SmartZip Brings Real Estate Data to the Blockchain with Chainlink

The Future of Bitcoin and Real Estate

We are pleased to announce that SmartZip has launched its own Chainlink node live in production.